Almost 22 years ago I was here:

That’s me in the front row with the camera at the beginning of the video.

Last night I saw them again. It was a big decision to go, actually.

It was 6 weeks after the Berlin wall fell. Europe was euphoric. The show was broadcast via radio all over the world. And I was there. In the front row. With my camera, (which got broken).

So we biked to the TCF Bank Stadium at the U of Minnesota, where I was a student in 1989. 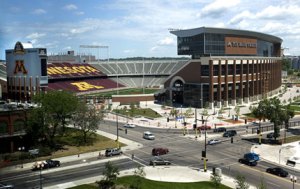 It was a gorgeous evening. 58,000 Minnesotans and their friends all there to celebrate U2.

We met some really nice ticket scalpers, but elected to simply sit on the grass of at the corner of University and Oak and watch the show for free.

We stayed until the rain soaked us and we biked back to St. Paul.

It was deafening, it was glorious, it was the most fun I’ve had in a long time. And I’m so glad I didn’t buy a ticket, because really, how could anything top seeing them in their heydey in 1989, in a small theatre for 8,500 people?

Have you ever seen U2? What did you think? I’d love to hear about it.